How to become rich with Pokemon cards 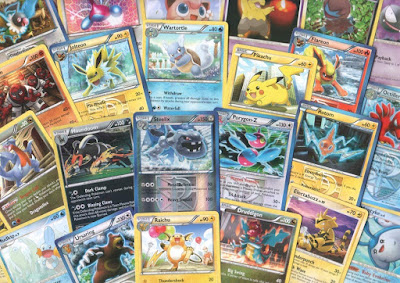 It’s always interesting to find out how much someone’s collection is worth, especially if it happens to be something you collect yourself.
Here’s one for the Pokémon card collectors out there. A man named Yoshiharu Takahashi recently went on Japanese program Kaiun! Nandemo Kanteidan (Good Fortune! The Group That Appraises Everything) with a collection of 31 Pokémon cards he estimated to be worth ¥1.2 million, which adds up to about $10,730.
Fortunately for Takahashi, he was actually way off on his estimation. According to professional appraiser Yūya Satō, Takahashi’s collection is worth about ¥7.6 million, or $68,674.
The value comes down to a few seriously rare cards, including the Kangaskhan parent-and-child tournament entry card, 34 of which were distributed at a single event in Japan back in May 1998. Just one of these is worth ¥1.2 million on its own; Takahashi has four.
He also has a bilingual Lucky Stadium card that was only given to players who passed the qualifying rounds to be invited to a Hawaiian tournament. That one is worth a cool million yen. 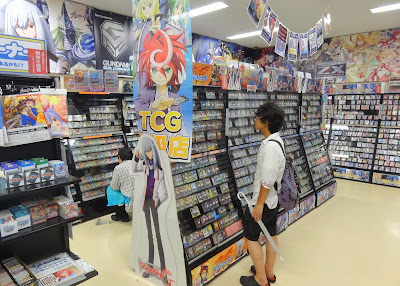 Speaking of trading cards, here's an excerpt from my Tokyo Geek's Guide:
Trading card games (TCG) (also called collectible card games) are big in Japan and their popularity goes well beyond the usual world-famous titles (Pokemon, Yu-Gi-Oh!, Magic the Gathering, etc.) to include many anime-based games. The main TCG-selling chains (Yellow Submarine, Amenity Dream, and Big Magic) have many branches around Tokyo and are pretty similar. They sell both sets and singles, with sets collected in binders and rare and/or popular cards displayed in showcases. They even have quite a few English cards as apparently some Japanese players prefer to use them. If you are looking for something in particular you can make a list and give it to the staff. Just be warned that on average, singles in Japan tend to cost more than in other countries. One more tip on TCG good manners: You will rarely see the Japanese trade cards inside shops, and actually there are some that explicitly forbid trading on the premises. 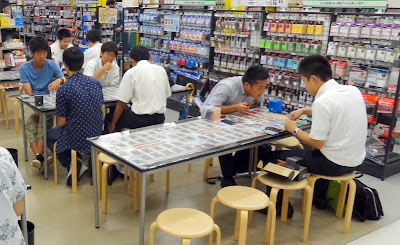 Many TCG shops have tables to play games, and on their websites you can find information on upcoming tournaments. Most of them are small events. Signing up is quite cheap and if you do well you can get some cool prizes like deck boxes, card sleeves and binders. Obviously almost all participants are Japanese, but don’t worry because they are very welcoming and curious about foreign players, and even if you don’t speak Japanese, card language is rarely a problem. For more information on playing in Japan (especially Pokemon) check out Finnish champion Esa Juntunen’s blog (http://thedeckout.blogspot.jp)
TCG stores in Tokyo are typically close to each other, so if you don’t like the prices or selection at one store you can always try another one nearby. One of the more convenient places is Radio Kaikan in Akihabara. The 10-story building houses six トレカ (toreka, as they are called in Japan) shops including Yellow Submarine (sixth floor) and Big Magic (ninth). And if that’s not enough, in the building in front of Radio Kaikan there’s another shop, Cardkingdom.
Share This Post