Are anime and manga fathers really so bad? 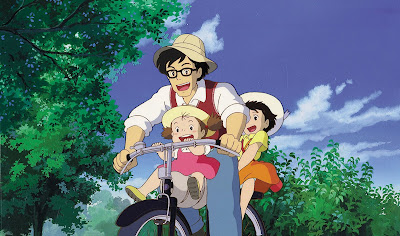 A lot of manga and anime stories revolve around ridiculously strong and clever junior high and high school kids who save the day in a world where not only parents but adults as a whole barely count.
Many people have pointed out the conflicting father-child relationship in many such stories.
Although there are also fathers who try their best, and being myself a father, I prefer to talk about them:
Soichiro Yagami (Death Note)
It is never easy being a parent, especially one that is raising a serial killer son and working as detective to solve the case. Any dad that can handle the pressure and still put their family first shows strength and determination. One could say Sorichiro Yagami is stuck between a rock and a hard place. Amidst the truth about who his son really is, Sorichiro still believes in his son’s innocence, which unfortunately ends tragically for this dad.
Tatsuo Kusakabe (My Neighbor Totoro)
Every father wants to keep their children happy and Tatsuo Kusakabe is the ideal example. He is a great person by the way he listens to his children, cares for his sick wife, and holds a career. While most parents laugh it off when children say silly things, he fosters his children’s curiosity and imagination with Totoro. A dad that is willing to give his fullest attention to a child deserves a Top
Shiro Fujimoto (Blue Exorcist)
A person doesn’t need to have biological children to become a parent. Adoptive parents deserve the love too like Shiro Fujiimoto! A risk taker, humorous, and tolerant individual, Shiro possesses the qualities of a great father. Especially when it comes to taking care of Rin and Yukio on their worst days. Because not everyone can be as saintly as Shiro Fujimoto when it comes to taking care of demons!
Kohei Inuzuka (Sweetness and Lightning)
As a single father, Kohei is a wonderful hardworking dad that puts his child first before his own needs. After the loss of his wife, Kohei wants to instill good values in his daughter to make sure she grows up right. His willingness to learn to cook proper meals for his daughter shows that he deeply cares for his child. This Anime dad represents all the dads that strive to give the best life for their children.
Goku (Dragon Ball Z)
Energetic, pure of heart, and though practically gone for half of his son’s life, Goku is still a top anime dad. He may be physically absent but he is emotionally present for his son. In times of trouble, he protects his family. Who can forget the special father and son moments when Goku saves Gohan during a fight against Recoome? Or teaching his son how to become the best fighter? Maybe the Goku wasn’t there for all the moments, but at least he showed up once in awhile to help kick butt.
Spirit Albarn (Soul Eater)
Nobody is a perfect parent and Spirit Albarn fits in this description. Due to his womanizing behavior, Spirit Albarn is highly unlikely to earn the “Best Parent of the Year” award, but he at least deserves the “A for effort” award. He continuously tries to bond with his daughter by showing love and support. Even when she denies him, he keeps striving for a daddy and daughter relationship. Any man that thinks his daughter is his number one girl, is a great dad.
Sojiro Izumi (Lucky Star)
A dad that loves watching anime, playing video games, and is a die hard otaku has the best qualities for top anime dad like Sojiro Izumi! Despite the challenges as a single dad, he shows strength to carry on and raise a great daughter, Konata Izumi! As any great otaku dad would, he teaches his daughter that the two most important things in life are Anime and Video Games. What kid wouldn’t want their dad to have these two great passions in life?
Naruto Uzumaki (Boruto)
Parents who go through many life experiences end up becoming great teachers to their children. In the beginning, Naruto was a naïve, immature boy, who eventually learns from his mistakes. As a man, he passes these important life lessons such as justice and accountability to his son. A dad that takes the time to be a mentor to his children is a loving father!
Akio Furukawa (Clannad)
Although he is rough around the edges, Akio is benevolent and sympathetic. He makes many sacrifices for his daughter, Nagisa. An example is when Akio quits his job as an actor due to Nagisa’s health and has no regrets about it. For him, as long his child is happy, then he is happy. Akio represents a great father, who makes hard choices that will foster good well-being for his children.
Maes Hughes (Full Metal Alchemist)
A proud father, Maes never wastes time bragging about his daughter and wife. His personality is considered to be trustworthy and amicable. He is protective of his daughter, especially around boys when they ask to play with her and he never fails to show that he is a devoted family man! His coworkers are often annoyed by him for showing pictures of his daughter and wife; but who doesn’t love showing off their children? Maes Hughes is the fun, strict, and lovable character that most of us can relate with our dads.
Share This Post